We then gave a chance to both proposals.

Finding written Dutch dances was not easy. Especially as we were more interested in what could be found online (thus avoiding Dutch libraries). After a while, we found Elsche Korf's website. Elsche is a specialist in Dutch traditional dances and has been teaching them since 1973. In her page we found a list of various dances, most of them with a PDF where their description can be read. We then selected five dances: Riepe Riepe Garst, Baonopstekker, Slaapmuts, Olde Step, and Ijswals.

Let's take a closer look to the beginning of Baonopstekker, as described by Korf:

Understanding how the bars/counts related to the actual movement was not complicated. Finding the movement out of the written words was sometimes creative, but often we just simplified it: 8 walking steps - yes, there are many ways of walking, but we kept it casual and stripped out of cultural values. Now, what was a real challenge for us was understanding CW and CCW. It took us 30 minutes to figure out. Can you guess? Will reveal it in a P.S.!

For Julia's proposal it was slightly easier to find material. We had to make sure we would cover a wide range of the World's surface, so that distinct cultures could come together. Here is the map of the countries we covered: 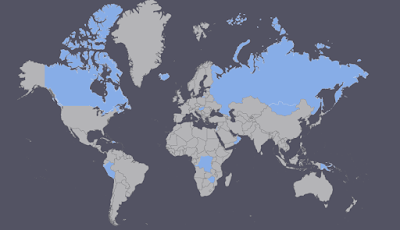 Nowadays you quickly get to know other countries, cultures, through the internet. But is the information you gather there real? Is it trustable? We went on youtube and searched the selected countries mentioned above followed by the words "traditional dance". Often the results were from tourist recordings of some traditional dance performances - probably put together for them -, some other examples are of traditional dance companies that carefully assembled a video to promote their work in and outside their country. We liked this range of results, from trustworthy to unreliable, from too amateur to too professional - this is internet. This is the world of information we live in today.

Among these varied results, we would select only one video, often the first one, and extract 10 to 30 seconds of movement. It took us some time to understand some of the movements because of their weirdness (which attracted us) or because of their completely different cultural understanding of the use of specific body parts.

Overall, the balance seemed right: in one hand we allow our imagination to interpret written text, in the other hand we force ourselves to interpret movements that our bodies have never done.

P.S.: Still thinking what CW and CCW could possibly stand for? Clockwise and counter-clockwise!
Posted by João Dinis Pinho at 11:36 AM