Vira do Minho is, as the name says, originally from Minho the very north coast part of continental Portugal. It is considered the queen of the dances of the region. On rigorous costumes, the pairs form a circle and slowly turn counterclockwise. The men go forwards and the women backwards. The dance goes on until one of the dancers screams "fora” (out) or “vira” (turn), then, the men turn to face the woman that preceded them. This movement goes on until all of them have exchanged partners, while the circle turns and turns around and around. But this is just one of the most simple Vira’s in circle, some others can be much more complex. The names that this dances take are multiple: vira, ileio, tirana, velho, serrinha, estricaina, salto, and others. 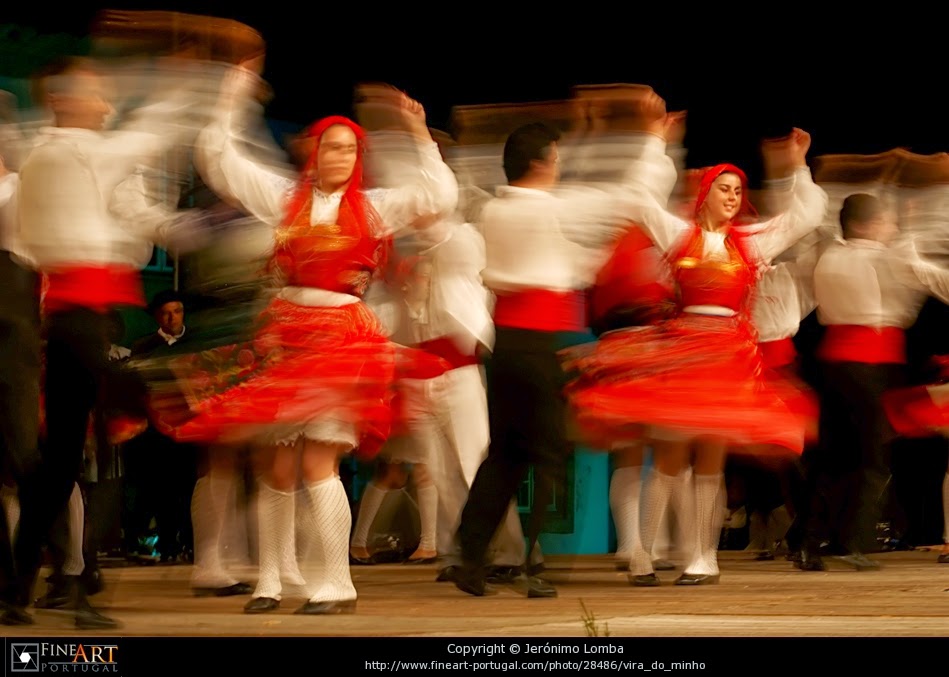 Fandango might be the keyword when exploring Vira’s origins. Opposing the initial idea that Vira was based on the Waltz of the eighteenth century, Sampayo Ribeiro and Gonçalo Sampaio defended that the dance and the music have its similarities to Fandango and that it can be older than the sixteenth century. The closest example might be Vira de dois pulos (Vira of two jumps) from Mafra and Lagoa, with astonishing similarities. According to Tomaz Ribas, Vira can be one of the oldest traditional dances in Portugal with appearances in some theatre texts by Gil Vicente (séc. XV) like Nau d’Amores where it is referred as “the dance of Minho”.


Viana do Castelo, a city in Minho, is very famous for its vira but it’s not the only. When in Braga, you can see the Vira Galego (galician Vira), “without primitive opulence”, as Pedro Homem de Mello has described it. As we trace the coast, towards the south of the country, the Vira doesn’t disappear. After the energetic Vira do Minho we find Vira of six in fishermen lands.
In the video, you can watch part of our process of learning the conchero's dance combined with a video of a performance by Maria da Fonte da Casa do Minho. Unfortunately, just like with the other dances, we couldn't give as much attention to this dance as we wished. All we had was a few days of grasping it, by learning from videos.

The content of this publication is a compilation of information gathered from the following sources:
Folclore Online
Wikipedia
Posted by João Dinis Pinho at 11:35 PM