The dance of the Concheros is derived from ancient dances performed by the native peoples in Mexico. In pre-Hispanic Mexico, dance was a very important part of life. Sacred dance was related to religious ritual. Dance was done to please the gods, to ask for blessings, and to receive permission to carry out activities.


The native people felt they could communicate with the cosmos and divine forces through dance. The original instruments were drums, rattles, flutes, and anklets made of shells that reverberated with each step taken. The instruments produced percussive sounds to send forth to the universe. This in turn would establish a connection between mother earth and the sun god. The performers dance in a circle to represent the solar system. The costumes have been adapted for theatrical appeal. 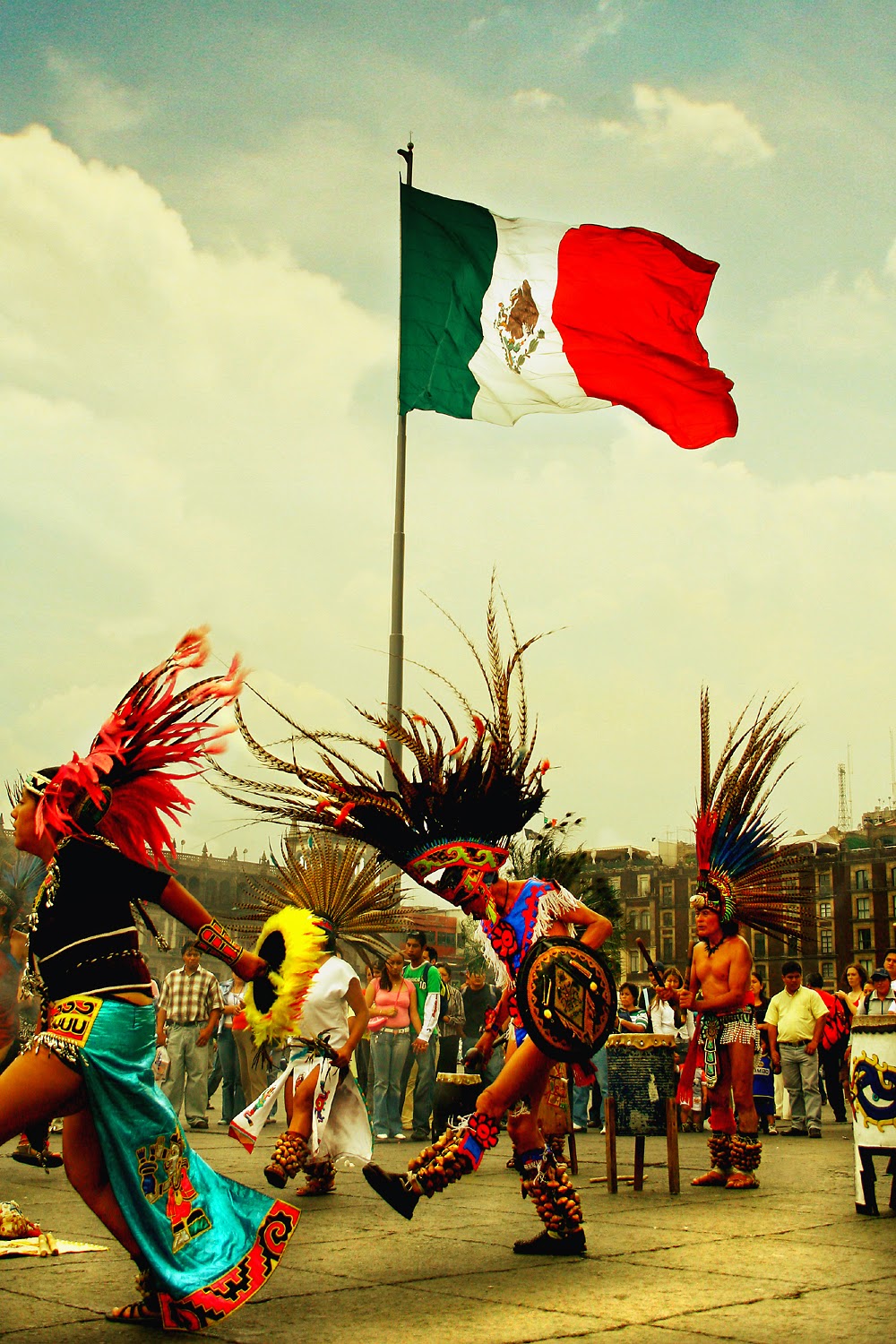 At the time of the Spanish invasion of Mexico, the Aztec civilization was dominant. The Aztec nation fell after the Spaniards defeated their king Cuatemoc, through torture and eventual murder. The Spanish clergy was determined to quickly convert the natives to Catholicism. They were forbidden to play their instruments. If caught doing so, the offender lost his hands. The sacred dances were also prohibited. They were considered pagan rites. Eventually the Spaniards made exceptions to that rule. They did so in order to make the new religion more appealing. The native people of Mexico could resume their traditions outside churches for the feast days of Catholic saints and other religious holidays.
The guitar was introduced to Mexico by the Spanish. The Mexican Indians fashioned a guitar-like instrument from armadillo shells. The shell was called a concha; and thus the name Concheros.
Conchero dancers are made up of specific units called mesas. The units are regimented in a military type format with a captain and other leaders responsible for certain aspects of the dance.
Every year Conchero troupes make a pilgrimage to Mexico City for the December 12 feast of Our Lady of Guadalupe. Guadalupe is the patron saint of Mexico and all the Americas. She is as important to Mexican identity as the symbolic eagle. Each year conchero dancers from around the country can be seen performing their traditional dance outside the basilica in her honor.

In the video, you can watch part of our process of learning the conchero's dance combined with a video of a performance by Grupo de Danza Popular Mexicana Pueblo y Fiesta. Unfortunately, just like with Corridinho, we couldn't give as much attention to this dance as we wished. All we had was a few days of grasping it, by learning from videos.

“Each dancer must struggle against trends of his human nature that prevent them from reach the inner attitude appropriate to properly perform the ritual, and, thus, to reach the state of ecstasy, is necessary to achieve the divine or that divinity reaches them. These risky temptations are superb envy, anger, shame, vanity, etc. It would be a struggle for individual development, a fight for harmony. On the other hand, the fight as a unit group engages against the negative cosmic forces that may try to prevent the ritual. These dark negative forces are the "enemy", and the dancers form a battalion that aims to defeat them to reach the light and make her own. Each dance is an attempt to do so, but to access the divinity the Conchero first has to be at it services and offered himself through his sacrifice and his struggle, becoming the Supreme force mediator.” (p.49, González Torres)

The content of this publication is a compilation of information gathered from the following sources: