Composition is often associated to music but, in fact, the real meaning of the word makes it possible to apply in other arts as well. Composing happens in everyday life, it's about putting things together. In music, a composer collects and distributes the notes as she/he wants, in order to compose a piece as she/he wishes to. Applying make up in your face in the morning, dressing up, cooking, walking, are some examples that prove that indeed composition is part of our daily life even without us noticing it. So, as the examples given imply, composition is about choice making. In "the most perfect piece ever made", the best choices are taken at the best moments. In "the worst piece ever made", this choices are very questionable! 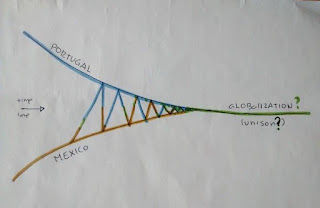 What we did in the composition of Diluting was using the elements of the deconstruction (see previous posts) to build the performance in accordance with the concept we had.


When deconstructing we aim to find what we considered the essence or the key aspects of each traditional dance. Not only the literal movement was deconstructed, but the spacing of the dance itself, the relation between the dancers, the colors of the costume, the feeling, the intention, the stories behind them, etc.
For the composition of the piece, we started by planning two time lines that would represent the traditions of Mexico and Portugal. This lines starts to relate during the time line of the piece, to slowly become similar until the unison of the movement and costume would make a visual analysis of the place of traditions within globalization. When selecting and making choices we were considering: what is in this traditions that would make sense to us in the actual present?

The music was added later on the composition process. Kaspar Föhres helped us to elongate the traditional music of "Jarabe Tapatío" and a typical "Corridinho" song to 30 minutes without changing the pitch. The two songs are overlapped and create a special atmosphere in the piece.

We decided to incorporate a glass bucket with water. The bucket has a light behind that beams in the walls the movement of the water. During the performance we insert some traditional clothes in the water. This clothes had ink in them, which would color the water, thus coloring the whole white space. As different colors were combined, the water would change its color, thus changing the room color too.

Is it the mixed of perspective? Syncretism? Globalization?... Where are the traditions? 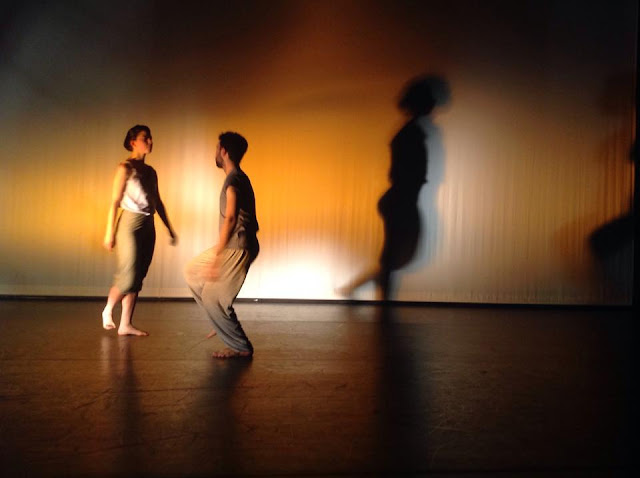