Mexico by other artists

The Spanish painter Salvador Dalí after a visit to Mexico said:


“No way that I will come back to Mexico.
I cannot manage to be in a country
that is more surrealist that my paintings”

"The Mexican, (…) seems to me to be a person who shuts himself away to protect himself: his face is a mask and so is his smile. In his harsh solitude, which is both barbed and courteous everything serves him as a defense: silence and words, politeness and disdain, irony and resignation. (...) He passes through life like a man who has been flayed; everything can hurt him, including words and the very suspicion of words. His language is full of reticence, of metaphors and allusions, of unfinished phrases, while his silence is full of tints, folds, thunderheads, sudden rainbow, indecipherable threats. (...) He builds a wall of indifference and remoteness between reality and himself, a wall that is no less impenetrable for being invisible. 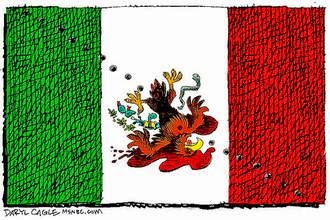 The Mexican is always a remote, from the world and from other people. And also from himself. Hermeticism is one of the several recourses of our suspicion and distrust. It shows that we instinctively regard the world around us to be dangerous. This reaction is justifiable if one considers what our history has been and the kind of society we have created."


"The Mexican views life as combat. This attitude does not make him any different from anyone else in the modern world. For other people, however, the manly ideal consists in an open and aggressive fondness for combat, whereas we emphasize defensiveness, the readiness to repel any attack. The Mexican macho-the male- is a hermetic being, closed up in himself, capable of guarding both himself and whatever has been confided to him. Manliness is judged according to one’s invulnerability to enemy arms or the impact of the outside world stoicism is the most exalted of our military and political attributes. Our history is full of expressions and incidents that demonstrate the indifference of our heroes toward suffering or danger. We are taught from childhood to accept defeat with dignity, a conception that is certainly not ignoble. And if we can be resigned and patient and long-suffering. Resignation is one of our most popular virtues. We admire fortitude in the face of adversity more than the most brilliant triumph."

"While the Mexican tries to create closed worlds in his politics and in the arts, he wants modesty, prudence, and a ceremonious reserve to rule over his everyday life. Modesty results from shame at one’s own or another’s nakedness, and with us it is an almost physical reflex. Nothing could be further from this North American life. We are not afraid or ashamed of our bodies; we accept them as completely natural and we live physically with considerable gusto. (...) It is not suit of clothes we are in the habit of wearing, not something apart from us: we are our bodies.

"The Mexican considers woman to be a dark, secret and passive being. He does not attribute evil instincts to her; he even pretends that she does not have any. Or, to put it more exactly, her instincts are not longer her own but those of the species, because she is an incarnation of the life force, which is essentially impersonal. Thus it is impossible for her to have a personal, private life, for if she were to be herself- if she were to be mistress of her own wishes, passions or whims- she would be unfaithful to herself."


"In other countries woman are active, attempting to attract men through the agility of their minds or the seductivity of their bodies, but the Mexican woman has a sort of hieratic  calm, a tranquillity made up of both hope and contempt. The man circles around her, courts her, sing to her, sets his horse to performing caracoles for her pleasure. Meanwhile she remains behind the veil of her pleasure."


"To simulate is to invent, or rather to counterfeit, and thus to evade our condition. Dissimulation requires greater subtlety the person who dissimulates is not counterfeiting but attempting to become invisible to pass unnoticed without renouncing his individuality. The Mexican excels at the dissimulation of his passions and himself. He is afraid of others looks and fore he withdraws, contracts, becomes a shadow, a phantasm, an echo. Instead of walking, he glides, instead of complaining, he smiles, Even when he sings he does so- unless he explodes, ripping open his breast- between clenched teeth and in a lowered voice, dissimulating his song:

And so great is the tyranny
of this dissimulation
that although my heart swells
with profoundest longing,
there is challenge in my eyes
and resignation in my voice.


Perhaps our habit of dissimulating originated in colonial times. (...) The colonial world has disappeared, but not the fear, the mistrust, the suspicion. And now we disguise not only our anger but also our tenderness."
"Our sense of inferiority -- real or imagined -- might be explained at least partly by the reserve with which the Mexican faces other people and the unpredictable violence with which his repressed emotions break through his mask of impassivity. But his solitude is vaster and profounder than his sense of inferiority. It is impossible to equate these two attitudes: when you sense that you are alone, it does not mean that you feel inferior, but rather that you feel you are different. Also, a sense of inferiority may sometimes by an illusion, but solitude is a hard fact. We are truly different. And we are truly alone."

The quotes were taken from the chapter Mexican masks from The Labyrinth of the Solitude by the Mexican  Octavio Paz (Nobel Prize of Literature) translated by Lysander Kemp, Yala Milos and Rachel Phillips.